Catwoman 13 is wall to wall action, and it speaks volumes for what the characters care about and are focused on.  Some care about loved ones while others care about the possession. Some stark lines are drawn in Catwoman 13, and some secrets are revealed in the process.

I really like both covers for this issue.  The first is very relevant to the issue, but it also possesses a style all its own.  Catwoman’s pose is very ambiguous, but that posture usually means intense frustration with the things occurring around one’s self.  Carlos and his aunt are central to this issue as is Mrs Creel and her bloodletting.  While these remain central to the story the smoke, vapor, mist, whatever it is, that fills in the background of the issue makes it so much more mesmerizing.   It adds so much detail and depth and mysticism to the cover while in the end being a whole lot of nothing.

The second cover pops for two reasons – the eyes and the attitude.  The beautiful, green eyes done by artist Stanley Lau stare straight into your soul.  Add that to the attitude present, and the cover is gorgeous.  Some one just split Catwoman’s lip.  She wipes the blood away, and as she does, you see the enjoyment and fire present from the pain she is about to inflict back upon the perpetrator.

Don’t Be the Idiot

There is one role in life you never want to find yourself in, and that position is the position of rebound fixer/date.  The first date someone goes on after losing someone special never ends well.  They are trying to heal and rebuild, while the date tries to help them heal and fix themselves.  It sounds good, but it never ends well.  This lesson is a lesson James has yet to learn.

I will admit it was impressive he could keep up with Selena as she sprinted across roof tops, but in the end Catwoman is a woman not ready to move on and settle down again, not after Bruce.  Selina does not want to be fixed yet.  Carlos wants to fight for the spark.  Selina does not.

Then you have Carlos who learns the second most important rule in life.  When you live in a dangerous world on the shady side of the law (or a horror movie), do NOT answer the door blindly to some one you do not know.  I really liked how they paired Carlos and Selina on the pages as each went through their section of the story.  Unfortunately, Carlos’ mistake leaves him in a bloody mess on the floor.

Enter Mrs. Creel.  Her heart and feelings are as comforting as her face.  She will do anything to win.  All she wants from Carlos is the statue, but of course he won’t give it up.  He knows who she is.  The problem is Mrs. Creel came to play hardball.  When the physical intimidation doesn’t work, one goes for the heart.  Creel has Aunt Linda.  Carlos fights for those he loves, so of course he gives up the statue to Mrs. Creel.

A Secret Revealed in Catwoman 13

People have been chasing the stupid halves of this statue for some time now.  We know nothing about its origins, purpose or function – until Catwoman 13.  Carlos, bloodied by Creel’s goon, hand over the statue, but he drips blood on it.  It can be cleaned right? Not when it serves the purpose of the statue.  A giant, holographic, world map appears.  Take a close look at the map.  We do not know the meaning of all the symbols, but they are scattered all around the world.  Whatever those marks are, you know they are important.

Rule 3: Watch Your Back

Of course, about this time in comes Catwoman to save the day.  She always fights for those she cares about.  Otherwise she would not be the anti-hero we all love and care about so much.  I love how fast she cleans house, but the problem is her zealousness in taking down Mrs. Creel makes her drop her rear guard.  Creel’s reanimated son manages to stab her in the back – literally.

Not only does Selina get sucker punched, but so does Ray Creel.  Ray tries to keep things clean and wants nothing to do with his mother’s evil ways, but sometimes family problems are hard to escape.  Mrs. Creel now knows what must be done, and as I said before she doesn’t care who’s in her way.  She slashes her own son’s throat to reanimate the map!  Talk about heartless.

DC’s Plan For the Year

Selina wakes from her wound, and ready or not, heads back out to discover what happened back at the Creel mansion.  She finds Ray’s body but that is about all until something finds her.  A flying droid zooms into the room and projects a hologram of Lex Luthor, a very different Lex Luthor.  I do not know what all has happened to him, but he seems more powerful than ever.  Luthor offers her a deal, but it will take us two months to find out what it was.  The year of the villain is at hand!

We may not know where the map leads yet, but DC has spelled out their direction for the entire DC comic line.  Catwoman 13 starts the Year of the Villain. We do not know entirely what this means.  Catwoman, however, being a thief, falls under this category.

After three seasons of a successful TV show, Warner Brothers … 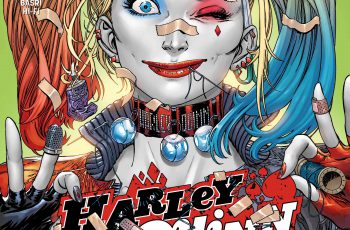 Harley Quinn 65 hit stands Wednesday, and with it, Harley’s …