It has been said that the new Thrawn series by Timothy Zahn is the best thing going under the Star Wars/Disney umbrella. In fact, his pre-Disney trilogy of Legends Thrawn books—Heir to the Empire, Dark Force Rising, and The Last Command—are still the best-selling Star Wars books of all time. It’s safe to say the fandom really likes the blue Chiss admiral. In the new series, the third installment has arrived! Enter, Thrawn: Treason!

“If I were to serve the Empire, you would command my allegiance.”

WARNING! Potential spoilers are ahead if you have not read the new Thrawn series! Read on at your own peril!

Thrawn: Treason follows up Thrawn and Thrawn: Alliances, where we see the Grand Admiral discover the Empire, swear his fealty to the Emperor, see first-hand his cunning in battle, a team-up with Vader and Anakin with Padme, and build relationships with members of the crew of the Star Destroyer Chimaera. One of those crew returns with a dire warning about his home world. However, things are a little different about Imperial Commander Eli Vanto.

Throughout the first book, Thrawn tests and quizzes Vanto, forcing him to become a more strategic thinker, and when Vanto begins to grow into his potential, Thrawn sees to it that Moff Tarkin promotes Vanto to Commander. When we last see him in Thrawn, Vanto is sent into the Unknown Regions with orders—and Thrawn’s personal journal—to serve as the Empire liason to the Chiss Ascendancy. He makes contact with yet another Chiss Admiral, Ar’alani of the Chiss Defense Fleet.

Why Thrawn matters to the Star Wars universe

Grand Admiral Thrawn is arguably one of the best and most complex characters in the Star Wars universe today. Getting to see his early days in the Empire in the first book, Thrawn, was enlightening, and for good reason. Here is an alien that can out-wit and out-think just about anyone the Empire has to offer, up to and including Vader and the Emperor. His origin is unknown, his allegiance is even more shady. Thrawn’s skills, however, are unrivaled and he puts them to work for the Emperor.

In Thrawn: Alliances, we get some extra back story on his first encounter with General Anakin Skywalker and Senator Padme Amidala, as well as a later team-up with the dark lord of the Sith himself, Darth Vader. Even with all of this revealed to the reader, Thrawn himself remains shrouded in mystery. He’s like that ogre fella with all the onion layers. Peel one back and you get one or two more. Speaking of more, now we get an even deeper look at Mitth’raw’nuruodo in this new installment.

With the release of Thrawn: Treason, we’re treated to a preview of what Commander Vanto has been up to among the Chiss. Read the excerpt below:

It had all started out well enough, Lieutenant Eli Vanto thought as he paged through yet another data listing filled with delicate Chiss script. Thrawn had told him that the Chiss Ascendancy had vital need of his talents and abilities, and that he’d arranged for Eli to be quietly released from his current duty aboard the Chimaera. Eli had accepted the new assignment and left Imperial space, arriving at the rendezvous point Thrawn had sent him to full of hope and expectation, with the excitement of the unknown tingling through him.

I am Admiral Ar’alani of the Chiss Defense Fleet, the blue-skinned woman had greeted him from the bridge of her ship. Are you he?

I am he, Eli had confirmed, making sure to fill his voice with the mix of confidence and respect that had served him well during his years in the Imperial fleet. I am Eli Vanto. I bring greetings to you from Mitth’raw’nuruodo. He believes I can be of some use to the Chiss Ascendancy.

Welcome, Eli Vanto, she’d replied. Let us learn together if he was correct.

That had been over a year ago. In retrospect, Eli thought a little sourly, he should have realized from Ar’alani’s neutral words and tone that she wasn’t impressed.

His first act aboard the Steadfast was to receive demotion from Imperial commander to Chiss Defense Fleet lieutenant. No real surprise there—different militaries would hardly have equivalent rank systems. His second act was to be dropped into an intensive course in Cheunh, the main Chiss language. Again, no surprise—though many aboard spoke the Sy Bisti trade language Eli was fluent in, it was certainly unreasonable to expect everyone to bend to the needs of a single crew member. Especially a newcomer and an alien.

But in and through all of that, Eli had expected to be put onto some kind of leadership or command track. Instead, he’d been dumped down here in the analysis department, sifting data, looking for patterns, and making predictions.

It was something he was very good at. Even Thrawn, with all his tactical and strategic genius, had recognized Eli’s superiority at such things, and had utilized his skills to their fullest. In retrospect, it wasn’t all that surprising that he’d passed that information on to Ar’alani.

The problem was that as far as Eli could tell, none of the data he’d been tasked to analyze meant anything at all. 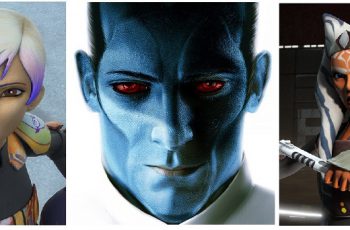 With now ten, feature-length, live-action films to pick from, it’s … 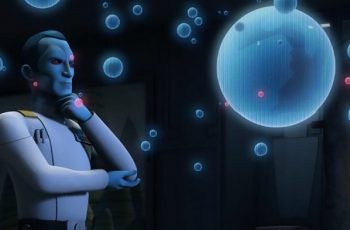 Timothy Zahn unveiled a frightening, new galactic threat in the …