Christopher Morris’ latest dark satire, The Day Shall Come, is poised to make a splash and offer food for thought. The film takes aim not only at extremism of (would-be) terrorist groups, but also the inefficiency and immorality of government institutions. After a warm reception at SXSW in March, it arrives in theaters on September 27th.

Morris has experience lampooning terrorist organizations with his acclaimed debut film, Four Lions. He adds another layer in The Day Shall Come, by crossing the Atlantic and focusing on the US instead of the UK. His time directing for Veep, a series that delves deeply into the travesty of American politics, served him well here.

Kendra Glack (Anna Kendrick) appears to be a well-meaning agent, but her desire for a score to present to her boss Andy (Denis O’Hare) does more harm than good. After discovering some inflammatory speech streaming on Facebook, with north of 20 views, she marks down the FBI’s next terrorism target. It’s a classic case of Did Not Do The Research and represents not only present-day government failings, but the media’s as well. When the “good guys” are creating their own bad guys, how good can they be?

The supposed bad guy in question is Moses (Marchánt Davis), who runs a farm-turned-church with his wife Venus (Danielle Brooks). Though their beliefs are indeed radical, The Day Shall Come wastes no time showcasing how far they fall from truly being a threat. If Kendra and the bags of testosterone she works with have failed to dispatch their duties, so too have Moses and his followers failed to effect any change. Except, of course, in the lives of those very followers – which is where the film creates pathos despite mockery.

The Day Shall Come pokes fun at Kendra’s coworkers and Moses’ crew alike, but Morris never lets the audience forget that the latter’s real goal is the betterment of his people. Kendra, on the other hand, wavers between wanting to look good to the bureau and actually wanting to do good. The ambiguity of both her actions and Moses’ beliefs is as unsettling as the jokes are funny, which leds the story to its disheartening conclusion.

Which is not to say it’s a bad ending, merely that it’s a realistic one. The title card warns The Day Shall Come is “based on a hundred true stories.” Meanwhile, the credits prove it was indeed a warning. The film doesn’t lose its wry humor or sardonic wit, but it certainly loses any semblance of innocence that it might have started with. Which is exactly as it should be.

Check out The Day Shall Come in theaters September 27th, and let us know your thoughts in the comments below. Check back with That Hashtag Show for the latest news on your favorite films. 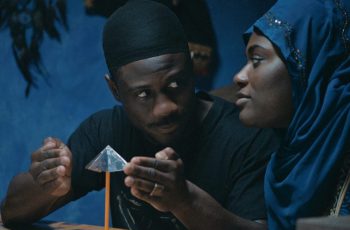 The Day Shall Come, starring Anna Kendrick and Denis O'Hare, …