The three retired heroes of The Battle For Mount Mist continue on into enemy territory to rescue their children in The White Trees #2 by Image Comics.

Krylos, Scotiar and Dahvlan almost got sidetracked by some lusty wood nymphs or something.  However, they have a bigger purpose than lust and it will be hard to divert them off their path.  Dahvlan and Krylos’ children were captured by the Trilonians and they will murder anyone or anything which gets in their way.

The group were deep in enemy territory and killed some enemy soldiers to steal their uniforms.  Krylos was the Trojan Horse of sorts and is used as a prisoner so the group could enter the fort.  However, what they found inside shocked the three warriors and heads literally rolled because of it.

The White Trees Left Me Disappointed

In the previous issue I saw some potential and had high hopes for this two issue series.  However, the conclusion was pretty predictable. I don’t know why Chip Zdarsky and Image Comics thought a little two issue story would satisfy anyone.

The story ended with a boom which is good, but I don’t feel different once it is ended.  A good story will leave the reader feeling some kind of emotion once they finish the comic.  I don’t feel happy, sad, angry, bewildered or anything. At the very least I would hope I will feel happy that I read it, but I do not.  This story will leave my mind once I am finish with this review and I will never think about it again. I think that is probably the worst thing anyone can say about a comic, but it is even worse when the comic isn’t awful.  It was just unremarkable.

I Got To See Krylos Fight

Something which I really wanted to see since the last issue I was able to see in this.  Krylos looks so badass and I never got to see him fight in the last issue, but I knew it would be awesome when he did.  I was right and he is a really good fighter and murdered a lot of soldiers all by himself. However, I would have liked to have seen Scotiar and Dahvlan fight more.  A few scenes with all three of them fighting together would have been really cool.

The story was just too short to cover what I think they had hoped to accomplish.  A little two issue story can be done and can be done well, but this was not the right story for that.  This was not a bad story by any means, but was just way too bland and predictable to be an interesting or a worthwhile read. 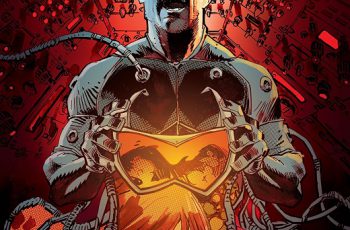