Well there we have it folks. The final Rise of Skywalker trailer of the Skywalker saga dropped. I think it lacked the pop or wow factor the last one possessed. There were no images of Rey and a red light-saber that made people’s jaws drop, but in subtlety is brilliance. Once broken down I think they showed a lot with this trailer…perhaps too much? Here is the trailer:

Where are the Ewoks?

I admit the way they opened the trailer I thought the first thing we would see would be a furry foot running past the camera in the form of an Ewok. Finn opens the monologue as we watch Rey train. It seems like more might be happening, but we see a training sphere in the background, and then she jumps in a large ship.

We then see a mob of people under Poe’s guidance in a control room of some sort. Rose also pops up here, which makes sense since this shot is the same one used for the photo still that dropped awhile ago. One interesting note. Look over Rose’s shoulder. Dominic Monaghan stands there with someone else, so there lies our proof that Meriadoc Brandybuck shows up for the fight. I love the shot of the CR90 Corvette pealing away. I wonder if the Tantive IV survived being captured?

Rise of Skywalker Final Trailer – Who is Rey?

Honestly this next shot intrigues me more than almost any other shot in the trailer because there are a lot of nuances at work here. Rey’s voiceover is one of almost exasperation. What if the resistance tries leaning too heavily on Rey and she snaps? All these people think they are my friends. They don’t know me. They don’t care about me.

But Kylo does. Take the romance garbage and shove it. There will be no romance in this movie in the form of Reylo. Kylo and Rey are two people that have gone through a great deal of pain adversity and uncertainty at the same time. There is a bond of kinship that does not form easily, but it also breaks even harder (ahem…Sidious take note). What if the pressure pushes Rey over the edge and Ben brings her back?

The key moment comes right after Ben’s spectacular shot of walking through the wave. Rey looks pissed as all hell, but Ben/Kylo, while stern, does the unexpected. He twirls his saber into a reverse grip with the blade behind him. That is not how you go into a fight. Jump forward a few scenes to where they are fighting and it looks like Rey is taking the aggressive swings, not Ben. Ben fights almost like Luke does in Return of the Jedi, very defensive.

The next couple shots of the Rise of Skywalker trailer are just gorgeous. First we have the TIEs flying towards the ice flows/bergs. Nothing else needs to be known other than that is one gorgeous shot!

Then we reach the first major spoiler – Sidious is a Targaryen! He had the throne flown in all the way from Dragonstone. No wonder he waited a long time for this. Okay maybe not, but if there were ever a perfect design for a Sith throne – that’s it! Note it also bears a striking resemblance to the force tree from The Last Jedi. Fascinating.

The Fleets Have Arrived

While Sidious’ dialogue continues, we see several amazing shots. The first belongs to the Star Destroyer breaking out of the ice like a Typhoon class Submarine from Hunt For Red October.

Then comes the teaser shot released earlier today of the Resistance fleet. We see the Falcon sweep down into the shot with the Ghost from Rebels sitting off to the right. For having their last capital ship wiped out in The Last Jedi, they sure have come a long way. Also note the Falcon is back to the original Circular dish, not the rectangular one.

Does a Hero Say Goodbye?

A tiny creature works on connections in the back of 3PO’s head. If we take previously released pictures we know what happens here. Note Zorri Bliss is present. Earlier we saw a pciture where she held out a disk that was supposed to be something to do with the Sith, but no one can break the code. We already saw 3PO with the red eyes. This scene must be the final moments before he is reprogrammed to be a Sith droid. His phrasing also fits this final movie of the saga. “…Taking one last look, sir, at my friends.”

He has such a sad tone to his voice, and poor R2 throws a conniption fit. Will this be the last we see of our favorite protocol droid? Or will he be reprogrammed? Don’t forget the first poster has 3PO with Chewie’s bandoleer and bow-caster.

We then get a blur of action with a few hugs thrown in. The hug between Leia and Rey is nothing new. This shot goes way back, but the difference we see here deals with both the length and emotion of the hug. Both look sad, but Rey is crying.

“Confronting fear is the destiny of the Jedi.” Luke saying this I feel strikes to the very heart of what this last movie will be about. Sidious used fear like a master, so we should assume he will apply that type of pressure once more.

Of this hodge podge of action shots, I think the sweetest belongs to the Y-wing. During Clone Wars and Rebels, the Y-Wing did its job as a bomber, but it never stood up to combat. By the time of A New Hope they looked obsolete next to a regular TIE defense fleet. I heard for Rise of Skywalker the Y-wing received some upgrades. It looks the same structurally, but the way it moves and shoots looks revamped. We have never seen them look this nimble. The shot looks cool.

Of course the Rise of Skywalker final trailer must have that one shot that I know will generate the hate from trolls. Jannah and Finn lead a charge on the surface of a Star Destroyer riding space horses. Not only will haters flashback to the Fathiers from The Last Jedi, but just the fact our heroes are charging across the surface of a Star Destroyer – on horses! Knowing the plan is to raid Destroyers on the surface of a planet, what is wrong with that? It allows a shuttle to land anywhere and our heroes to charge quickly across a ship that is a mile long.

Add in the previous scene of our heroes blasting their way down a hallway, it looks like they are taking over the Star Destroyer. Could this be a similar fleet to the Legends Katana fleet? Or even something like the CIS droid control ships. If they capture one ship, they could take control of the fleet.

Rise of Skywalker, the Final Trailer – The Set Up Scenes

The first once again is an absolutley beautiful shot. This shot belongs in story groups where you post a pic and tell writers to tell the story from just that photo. Rey and Ben square off in the Deathstar throne room. Rey’s lightsaber remains lit. Ben’s lightsaber cannot be seen, but again note the lack of helmet here. Then there, sitting quietly in the background, sits the throne of the most evil man in the universe. The last time we saw this room, Luke was fighting for his life and that of his father’s. Chills.

The next shot shows Finn racing down the partially submerged structure we see Rey and Kylo fight on earlier. Not only does he run, but he screams Rey’s name. Whatever happened before, he fears for her safety.

Then comes the biggest what-the-hell-was-that shot! Rey and Kylo (note the helmet is back) swing through something together, shattering it to pieces. I can’t make out any forms, such as a droid or person, but the top looks extremely close to Vader’s helmet. We know it returns in Episode IX somehow. Kylo wears his helmet, yet he and Rey look to be fighting together. The other strange thing is the room itself. It doesn’t look like a ship or any room we have seen before. The lights are Imperial design, but it is a white room, not hull gray or black. If anything it looks similar to Bespin.

We see a great shot of the riders charging down the hull of the Destroyer once more, but this time the camera zooms out to show the massive size and extent of this Imperial fleet. The size is incomprehensible.

Then a quick and very suble shot. Rey stands center frame. Against the left side are shadows, but if you look there can be no mistake. The robe of Darth Sidious sits on the throne. Rey hesitantly steps back. Could this be before Ben comes? Does Rey get scared to the Dark side for a moment? This could lead to the fight scenes we saw earlier until Ben wakes her up once more.

The final shot is again a beautiful shot. Rey stands there, saber raised near her face (perfect poster shot). Her emotions are hard to read, but they feel like calm, confident, ready to face the end no matter what. Then of course we hear Luke “The force shall be with you…” HOWEVER! Note the final word – “Always” is whispered not by Luke, but by Leia.

So as you can see, the trailer may feel underwhelming because there are not jaw dropping, shocking revelations, but at the same time there are a lot of subtle shots that speak volumes. The tickets are on sale. Our wait nears its end.

Fear is the path to the dark side… 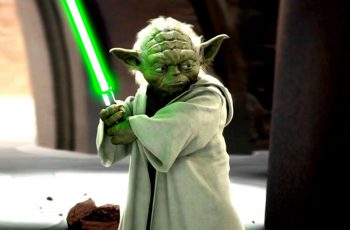 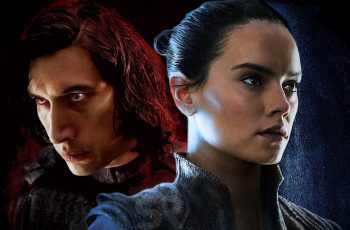