Initially this would have said SPOILER ALERT instead of Baby Yoda in the title, but by now, the cat is out of the bag everywhere. You’d have to be living under a rock on the back side of Jakku to not know who the surprise character from The Mandalorian is. Now we know, thanks to Carl Weathers, he has a name.

“You have to see the shows to figure out who this baby Yoda really is, and what he is all about, or even if he is really a baby Yoda. He has his own name, and he is very interesting and very knowledgeable and very cute. I never use that word, but he is a cute little guy.”

Let’s dissect a couple lines from that quote above. I’m sure it was said innocently enough, but he might have said too much.

“You have to see the shows to figure out who this baby Yoda really is, and what he is all about, or even if he is really a baby Yoda.“ That line leans toward the cloning theory. The good Dr. Pershing (played by Omid Abtahi) is currently thought to be a cloner and that baby Yoda might be a clone. For a clone to exist, there had to be a source, just like Jango and the Clone Army, so is this a clone of Yoda? A child of Yoda? Carl knows something here, and he might have let too much slip on this theory.

“He has his own name…” In most stories about clones, they are usually not individualized even if they have their own unique personality. The Clone Wars animated series showed us how over time, the clones came into their own being, taking names like Rex, Fives, Ponds, Cody and Echo to name a few. If baby Yoda has his own unique name, instead of a clone, he could be the source DNA for others.

Warning! Spoilers ahead for individual episodes of The Mandalorian.

“…he is very interesting and very knowledgeable…” After episode two’s escapade with the Mud Horn on Arvala-7, we see just how interesting and knowledgeable he is, lifting a sizable rhino-like beast in the air and saving our hero. Not bad for a 50-year-old baby. Yoda started training Jedi at 100-years-old, so our baby is halfway to maturity. Speaking of age, if you do the math, 50-year-old baby Yoda would have been born around 41BBY… about the same time as Anakin Skywalker. Coincidence?

What’s In A Name?

Now that we’ve been treated to episode three, some new theories are born. Carl tells us this little guy has his own name and is very knowledgeable. Since it appears he can’t fully speak yet, someone else is going to have to reveal his name or find it written on something, or the smart little bugger is going to have to reveal it somehow. My theory is when he does reveal his name, the Mando’s signet will become an outline of baby Yoda’s head. Going ahead and calling this one now. This is the way.

Another name we don’t know yet is “The Client”. Werner Herzog’s Empire-supporting character has yet to be named. He’s likely a displaced Imperial Moff or Governor from somewhere but is still connected to the machinations of the Empire. Why else would he be dropping Imperial-embossed Beskar for a little green baby? That child must be important to someone somewhere, and “The Client” is trying to make this deal happen. I’d be willing to bet the Falcon that it’s for something remaining of the Empire.

Then there is The Mandalorian, himself. No official name yet, and no reveal on his visage under the helmet. Ten-million per episode does not pay for a masked man with no name, so expect soon to hear and see what our Mando is all about. Pedro Pascal slipped up during an interview, saying the name “Dyn Jarren”.

See The Interview With The Accidental Reveal here.

“The Mandalorian—whose real name is Dyn Jarren—is your iconically cool, flawed, mysterious, loner gunslinger that hearkens to the best of the samurai movies and the Westerns…”

It is rare that the fandom agrees on anything across the board, however, it would seem the cuteness of this little Force-user is universal in his appeal. Everywhere you look on social media, you’re likely going to see baby Yoda somewhere on there. Amazon is already selling shirts. People are making memes faster than they can post them. “The Child” is everywhere right now.

During episode three, we can see the little green ball of adorableness has also grown on Mando. He’d lose his Mandalorian card if they knew he gave him that little piece of his ship to play with. Bounty Hunters don’t just do that!

Thanks to THS Editor J.J. Goodman, we got word this week that Baby Yoda merchandise will be out by Christmas, and I’m not afraid to predict they will be among the hot-toys-of-Christmas lists on every retailer’s website this year.

Let’s hear it fans. What do you think about Baby Yoda’s name and origins? A popular theory right now is he is the child of Yoda and Yaddle. If that’s true, his name should be Yodel. I have spoken.

Do you have a name for him? Let That Hashtag Show know in the comments! 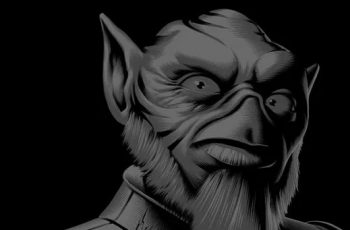 If you’re a Star Wars collector, chances are you’ve got …

Some new images have been floating around this week from …