If you have an aversion to spoilers, stop reading now. This article contains spoilers for Episode IX: The Rise of Skywalker!

In Episode VII: The Force Awakens, we see Kylo Ren talking to Darth Vader’s melted helmet. In that scene, he says this:

“Show me again, the power of the darkness… show me, Grandfather, and I will finish what you started.”

That scene was a foreshadow that we could not conceive of at the time, but really ties in well with the finale of Episode IX: The Rise of Skywalker. Let’s get into that here.

The Legacy of Darth Vader

Vader is likely the best, and most complicated villain in film history. Someone who could go from Jedi Knight Anakin to killing Younglings and his wife (albeit accidentally), to becoming the bad ass we saw at the end of Rogue One, killing indiscriminately until he got what he wanted. The conflicted Sith Lord was feared in every corner of the galaxy and his cruelty was well-known. Mention is made in Episode IX of the First Order accessing old Imperial databases searching for Exegol, so there is no doubt they also studied and knew Vader’s history.

What was likely not recorded in those Imperial archives was Vader’s final act of defiance on behalf of the light, tossing Palaptine into the Death Star’s abyss to save Luke’s life. Other than Luke himself, there probably wasn’t anyone else who even knew about that except those he may have told. Leia, probably Han and a handful of other Rebellion elites. Everyone else would have only known Vader as evil. Unless Leia or Luke told him the true ending of Darth Vader, Ben Solo would have only known his grandfather to be full of hate, cruelty and malice. A true Sith Lord.

Once turned, Ben Solo carried on just like Darth Vader while wearing the mask of Kylo Ren. Full of hate and cruelty, he guided the First Order down the dark path spreading fear throughout the galaxy. One of the brighter moments of Episode IX was the same change of heart and the same sacrifice Ben Solo makes, just like Anakin Skywalker, to save the life of someone he cares about. I hesitate to call it love because there wasn’t enough time for that to develop between Rey and Ben. Nonetheless, he still follows his grandfather’s unknown example and gives his life to save hers. In the end, he truly did complete exactly what Vader started.

Making Rey a Palpatine erases all the Mary Sue references. A direct descendant of the (arguably) most-powerful Sith Lord ever would already have strong abilities, some of which have never been seen. Rey had that and then some. Then, making her and Kylo Ren Force dyads makes total sense, too. Palpatine created Rey through normal procreation (we think), and he created the Skywalker line by manipulation of midichlorians. Technically, they are related and it makes sense they would follow on their respective genetic paths: Rey as to Palpatine and Kylo as to Vader.

Had Ben Solo lived, the ending of Episode IX would have been more poetic

On social media, some fans complain that Vader’s legacy and sacrifice was thrown out the window, but they’re wrong about that. Vader’s legacy lived on through Ben Solo. Ben committed the same acts of violence and hate as Darth Vader, and when confronted with the evil truth of the Sith, gave it up and chose the right, just like Vader did. To quote Darth, “The circle is now complete.” To cap the whole thing off, he did something Vader could never do: Bring back someone from the dead.

While I see the irony in Ben’s ability to resurrect Rey, there was a different path it could have gone. The only change I would have made to Episode IX‘s ending was to let Rey die and have Ben go into a self-imposed exile in his old family home on Tattooine instead. The final end of all the Palpatines at the hand of the last Skywalker, and proof the pursuit of bringing back the dead was a folly all along.

Picture the role reversal in your head. Rey dies in his arms, disappears into the Force. Ben collects his mother’s and uncle/grandfather’s light sabers and takes them to the ruined Lars moisture farm for burial. As he buries them in Rey’s cloak, he sparks a newly-constructed saber with a yellow blade, making Ben Solo the redeemed guardian of the light.

The old woman asks who he is, and he replies, “My name is Ben.”

Queue the posed double sunset and cut to credits. Now THAT would be a monumental, poetically-justified ending.

I loved Episode IX: The Rise of Skywalker, and while it was not perfect in all explanations, it was a perfect Star Wars movie. It had all the elements of the original trilogy ending without rehashing the same story lines and preserved Darth Vader’s legacy through Kylo Ren, even though he died. The real loser in all this was Luke.

Sadly, his exit from the franchise was not how I would have written him out, but The Last Jedi happened and nothing can stop that now. Luke’s father sacrificed himself so his son could live and what does he do? Isolates himself on Ahch-To to wallow in self-pity. Talk about a disappointment and a trashing of legacy. He could have made a triumphant return to the Resistance and led the final charge against Palpatine, but instead he threw his saber over a cliff and quit. The Emperor may as well have turned him or killed him, makes no difference. In that moment, Luke died a thousand deaths and fully negated Darth Vader’s legacy, not Kylo Ren.

Now Kylo Ren and the dark side is dead, Palpatine is finally destroyed, and a yellow saber-wielding Rey lives in the desert of Tattooine. But there’s a problem here. The Force craves balance. With all those baddies dead and Rey still living, there’s too much light side. Somewhere, the dark side is still lurking and creating it’s answer to Rey Skywalker. We likely have not seen the end of her, or the Sith, at all.

Check out That Hashtag Show to keep up with all your Star Wars news and reviews!

Star Wars Episode IX is still 14 months away and … 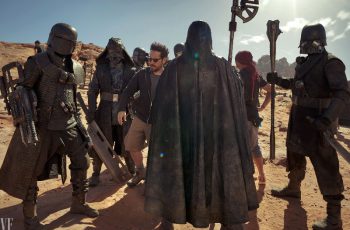 Star Wars: The Rise Of Skywalker is releasing on December …