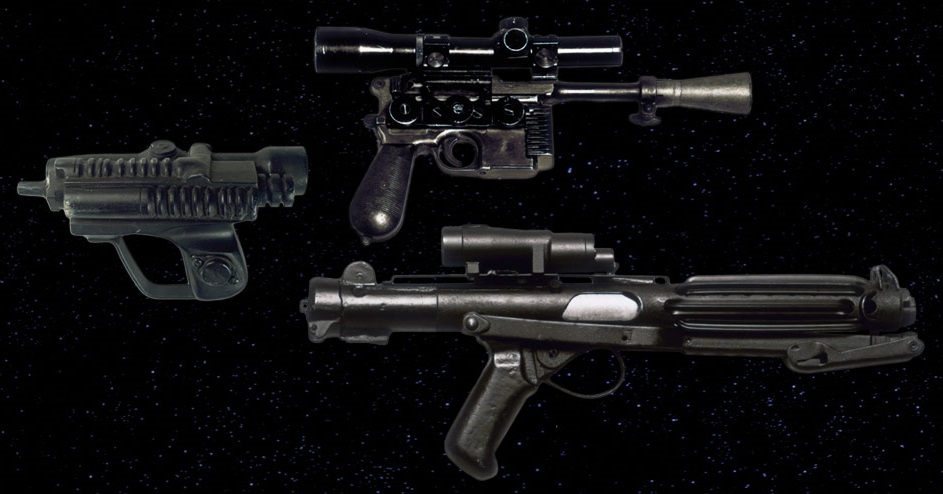 The term “blaster” in the Star Wars universe describes a class of weapon that has existed since ancient times in their galaxy. In our world, blasters would be classified as “plasma weapons”, since blasters fire plasma bolts. Blaster bolts could also detonate on impact with their target, causing concussive damage similar to an explosive shell but without the fragmentation. They even come in many different colors for those who want to make their battles more stylish. Their only disadvantages are magnetic fields, deflector shields, and lightsabers wielded by magic space wizards.

All this just mean blasters in general are great weapons, and thus good for defending yourself against any would-be attackers who aren’t a Jedi or Sith. To that end, here are my top 5 blasters for when a random thug decides to make your life difficult.

At 5th place, we have the chunktacular E-Web heavy repeating blaster!

The E-Web is a heavy crew-served weapon used primarily by the Galactic Empire, and I really do mean “heavy” in all definitions of that word. The weapon weighs 38 kg/84 lbs, and that may be with or without the generator, power cable, and tripod. Either way, this thing isn’t going anywhere fast if you’re only using your muscles to carry it. The fact that you need 2 people to carry it should tell you that even without knowing its weight.

Fortunately, that doesn’t matter. The E-Web has an effective range of 200 m/656 ft, and its generator gives it unlimited ammo. Its sheer power means that it’s a weapon somewhere between heavy machine gun and automatic grenade launcher. An E-Web mounted in a window with some sandbags underneath it could hold off an army.

Unfortunately, it’s the E-Web’s size, weight, and need for a loader of sorts that’s what puts this weapon at 5th place for self-defense. If you need someone else to help you fire it, it’s not a self-defense weapon. It’s a good home defense weapon though, and the perfect way to scare some pesky kids off your property. Much better than a M1 Garand.

At 4th place, we have the Lego blaster: the DC-17m Interchangeable Weapon System!

The DC-17m was a weapon of the Galactic Republic, primarily used by their clone commandoes like Delta Squad. Mostly Delta Squad, really. Okay, the only people we really remember wielding this is Delta Squad.

When you look at what the DC-17m can do, it’s no wonder why Delta Squad loved it so. In its base configuration, it’s a simple albeit short-barreled blaster rifle. With the addition of a longer barrel, collapsible bipod, and holographic scope though, it’s suddenly a sniper rifle. And with the addition of a launch tube and a blast plate, it’s suddenly an anti-armor grenade launcher. It’s basically the Swiss Army knife of blaster rifles, giving you an option for every situation as long as you have the right attachment for it.

Unfortunately, those same attachments are the reason why the DC-17m is in 4th place. It’s a bit of a pain carrying all those attachments for each specific job, and it might be a bit hard trying to carry them concealed on your person. Without those attachments though, the DC-17m is just a normal blaster rifle that feeds from 60-round power cells. While perfectly adequate on its own, it’s a little inferior to the other weapons on my list.

At 3rd place, we have the Imperial staple: the E-11 blaster rifle!

The E-11 was the standard issue weapon of Imperial stormtroopers back when there was a Galactic Empire. It ended up gaining a certain…reputation for lack of accuracy, although it was more on the part of the stormtrooper than on the rifle itself. Even that though is up for debate.

In any case, there’s nothing actually wrong with the E-11 itself. On the contrary, it’s one of the finest blaster rifles ever made. The E-11’s power cell can carry anywhere from 100-500 rounds worth of power, and it has an effective range of 100 m/328 ft. It even comes equipped with a scope for making precise shots, making it easy to see how those stormtroopers could’ve taken down a sandcrawler with it.

It’s easy to see why the E-11 is in 3rd place here, but there’s more. The weapon actually has a stun setting, which fires a blue ring of energy that’s capable of knocking out someone without killing them. It even has a dialable power setting for species of different masses. Something like that is perfect for a self-defense weapon, just in case local laws make it…tricky to kill an attacker, or if you just want to leave your attacker alive for another day.

Honestly, only the E-11’s size keeps it from 2nd place. Despite its relatively small size, it’s still the size of a Sterling submachine gun, and it’s jutting side-mounted power cell makes it virtually impossible to conceal. It’s a good hunting and general purpose weapon, but it’s not exactly ideal as a self-defense weapon. Not compared to the other 2, at least.

Now at a close 2nd place, we have the ever reliable backup weapon: the DC-15s side arm blaster!

The DC-15s was a sidearm by the Galactic Republic, but mostly by the same clone commandoes who used the DC-17m. In this role, the DC-15s was kept just in case they needed to finish off an enemy, or if they just ran out of ammo for their main weapon. The latter happened surprisingly often, so the simple DC-15s saw a lot of action that way.

What makes the DC-15s unique is its self-charging energy cell. This could keep the blaster pistol firing long after other models would’ve run out of power. It could fire 7 shots in quick succession before needing to recharge, but its energy cell has a total capacity of 250 rounds before needing to be replaced. Compared to most other blaster pistols that “only” have 100-round batteries, this is a huge advantage in dakka.

Not only that, but it could even stun targets instead of killing them, making it a mini-E-11 and thus a very good self-defense weapon. The only reason why it’s in 2nd place is because the one in 1st place is just that much better.

And now we have the shining crown of the self-defense world: the DL-44 heavy blaster pistol!

The DL-44 is just a good blaster pistol BlasTech made for the mass market. Because it was made for the mass market, virtually anyone could get it, and so it became very popular with criminals, smugglers, Rebels, and virtually anyone else in need of a rugged and powerful blaster; including a certain Han Solo. In fact, you can’t really think of anyone else when you see this weapon. Except for Greedo, but from the wrong end.

It’s easy to see why the DL-44 is a favorite of Han Solo. The pistol is bulky and is a little on the heavy side at 1.3 kg/2.9 lb, but its power more than makes up for it. As you can see in the picture above, the DL-44 is powerful enough to blow a hole in a humanoid easily big enough to fit your fist through. It’d be a pretty good pistol if that were the end of it, but during Han Solo’s flight from Mos Eisley, the DL-44 demonstrated vastly more power than that.

Each bolt from the DL-44 blew gigantic chunks out of the walls of the starport, with many of the chunks easily the size of a human head. That takes serious explosive power, easily on the scale of 40mm high explosive dual purpose grenades and maybe ever bigger. The 2 very different results indicates a dialable power output, which suggests that the user can dial it down to stun mode as well.

This thing is practically the poster child of a multipurpose “hand cannon“, and is why it’s at 1st place. What use do you have for anything else when you have an antitank gun that can fit in a pistol holster on your belt? And with a 50-round power cell capacity to boot? 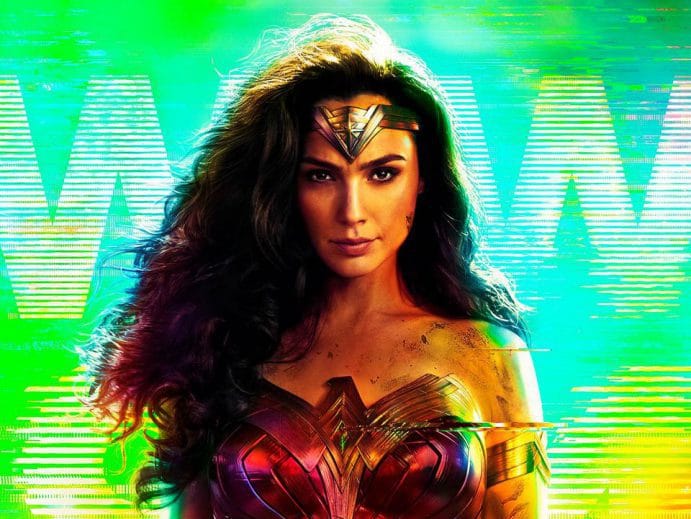 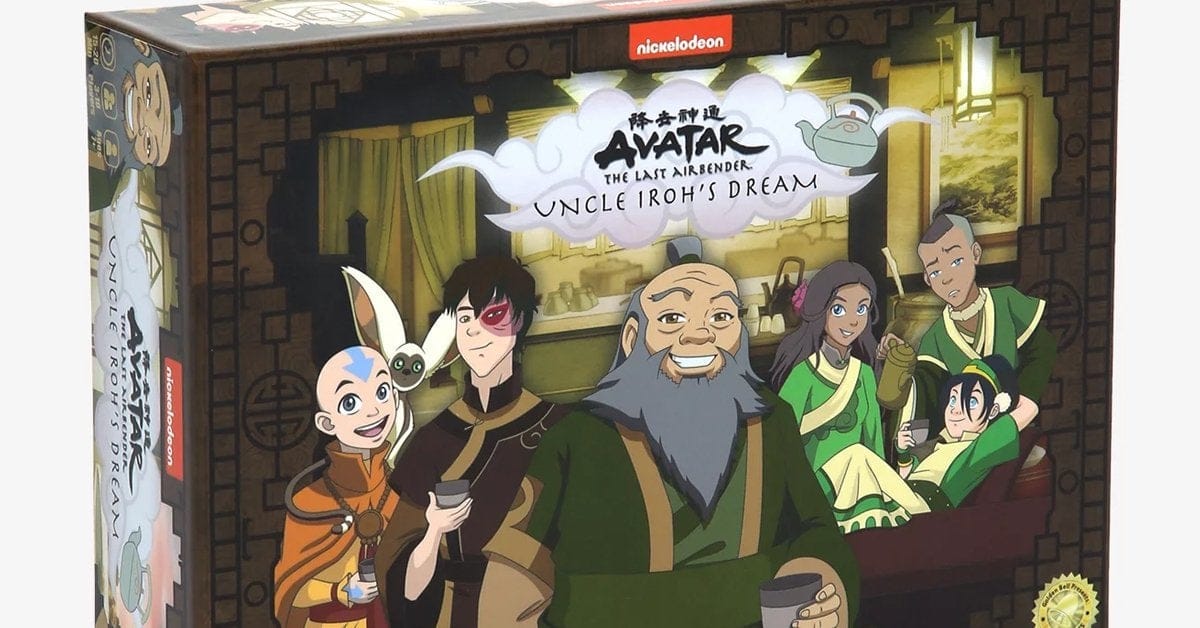