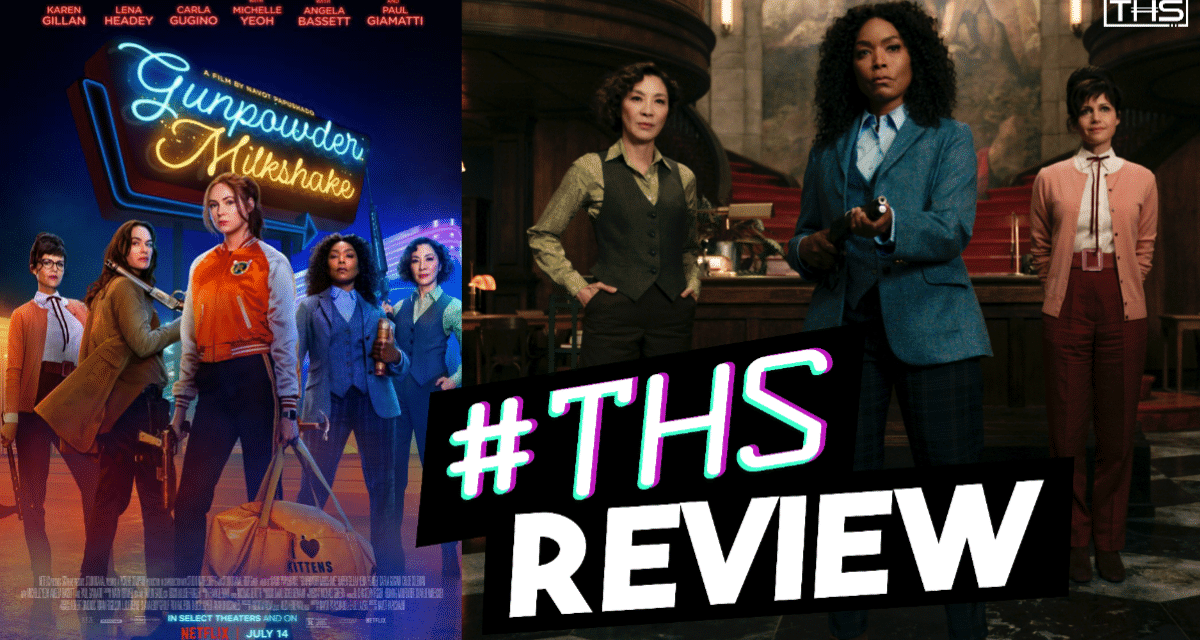 IF YOU HAVE NOT YET SEEN GUNPOWDER MILKSHAKE, THIS IS A NON-SPOILER REVIEW.

Gunpowder Milkshake will be compared to the John Wick films in pretty much every review you read or watch.  The film does not shy away from its similarities, in any instance.  There is an underground legion of assassins, who have a safe haven where they are not allowed to bring weapons. As well as a secret establishment that provides them with said weapons.  Our lead protagonist is someone who has been in good standing with the “big men in charge”. Until one day, a set of circumstances makes our hero go AWOL.

All of the building blocks of John Wick are here.  But, in this film, we get a lead cast of women who are kicking ass, instead of Keanu Reeves.  I wholeheartedly believe that if you’re able to get past these similarities, that Gunpowder Milkshake is so blatantly unashamed of… you will have a rollicking good time, with this kinetic action romp.

WHAT IS THE FILM ABOUT?

The film follows Sam, who was abandoned by her mother years ago, in the diner they always shared a milkshake at.  Just like her long-lost mom, she has become a hired assassin… and one of the best, at that.  One fateful day she goes on a job like any other, but she realizes that her target has a daughter who has been kidnapped.  Sam goes on the hunt for the girl. All the while becoming the target herself, of the men she has been working for her whole life.

HOW IS THE VISION BEHIND GUNPOWDER MILKSHAKE?

There’s a couple of things that Gunpowder Milkshake really has going for it.  The first being the ultra-stylish direction by Navot Papushado.  This film is a neon-laced, bubblegum-fueled fever dream that is filled to the brim with creative shots that make it feel truly special.  Some of the set pieces, as well, are so ingenious and bonkers, that you completely forget you’re watching a knock-off and begin to feel like your witness to something wholly original, instead.  There are so many scenes within the confines of this film that I was grinning from ear to ear because I was having such a damn good time.

HOW IS THE CAST?

The other huge plus of the film is it’s absolutely incredible cast.  The ladies of Gunpowder Milkshake, take no prisoners and chew the scenery in every shot they are in.  The trio of assassins that include Carla Gugino, Michelle Yeoh and Angela Bassett and Lena Headey as Sam’s mother, are so captivating, that honestly, I would be happy to see each one of them get a stand-alone film.  The problem is, none of these women get any real time to shine besides Gillan in the lead role.  Small moments they have between each other, hint at more nuanced character development that might have disappeared on the cutting room floor… but, as it stands now, they all seem like an afterthought, despite their presence being cherished.

Luckily, Karen Gillan is an absolute knock-out as Sam.  She’s unhinged, snarky, rugged and delicate all at the same time… proving that she deserves to be in the spotlight, far more often.  I just wish the other ladies were able to share a little more of that spotlight with her, in this film.

WHAT ARE SOME OF THE ISSUES?

My biggest qualm with Gunpowder Milkshake is its story. And not because of the fact that it is completely derivative of films that have come before it..  The movie starts out strong, building this world around our characters and setting the stakes early on.  But, as it progresses, the story starts to fizzle out until it completely flat lines at the end.  Leaving our villain with a throwaway send-off and the movie with nowhere to go, except a cut to the credits.

COULD THIS BE THE START OF A SUCCESSFUL FRANCHISE?

Gunpowder Milkshake definitely has all of the workings to be the first installment of an enthralling franchise.  And, if everything goes well, we will get to see that come to fruition, because a sequel is already in development.  But, what I need to see moving forward, is to take the parts of this film that worked so brilliantly (the creativity in direction, the fully-realized atmosphere and talented cast) and really hammer out the parts that didn’t (give its cast more to do and better development, really flesh out the script and give us a story we haven’t seen before).  If the filmmakers are able to build upon and improve on what we have here, they could definitely be on to something special.

Gunpowder Milkshake will be streaming on Netflix Wednesday, July 14th.

For more Rants, Reviews and Ramblings make sure to stay tuned to That Hashtag Show!

Summary This is a kinetic and ingenious little action film that is unabashedly cheesy and ridiculous. But, the filmmakers will need to flesh out its many issues, if they want Gunpowder Milkshake to be a successful and satisfying franchise. GLOW Cancelled By Netflix, Will Not Return For Fourth Season