Robert Rodruguez has perhaps one of the most diverse portfolios in Hollywood. This is a man who’s directed everything from Machete to Spy Kids, after all. Following this past February’s Alita: Battle Angel, the talented director is returning to his “kid hero” roots. In June he’ll begin production on a new, as-yet-untitled, kid hero epic. Today in this exclusive to That Hashtag Show, we can provide you these breakdowns for main characters of the upcoming film.

Here’s what we know about the Robert Rodriguez kid hero movie thus far: “After invading aliens capture the world’s greatest superheroes, a ragtag group of kids unite to take on the threat to humanity.” For this film’s purposes, superheroes are known as “Heroics” (as opposed to the “Supers” of the Incredibles franchise). The film will focus on lead character Missy Moreno (8-17; Hispanic/Latino).

Missy Moreno is the daughter of one of the Heroics, Marcus Moreno. Here’s her character description:

Despite her lineage, Missy has no superpowers of her own and elects to go to a normal human school. When her father, the other Heroics, and the world in endangered by invading aliens, Missy steps into a leadership role.Missy is disappointed in her father for fighting as a Heroic once again, having made him swear to stop.”

Joining Missy in fending off the alien invaders will be “Wild Card” (Supporting Male; 8-17). He’s a “kid Heroic who has the power to do just about anything – but has no control over his powers and is therefore unpredictable in action.” Wild Card is just that: “temperamental, constantly fighting with Missy for a leadership position among the Heroics. Wild Card and Missy eventually join forces, Wild Card accepting that she’s the natural-born leader.”

Looking over the would-be heroes is Ms. Gradenko (this movie’s Machete?) (Supporting Female; 30-59):

The Director of the Heroics, Ms. Gradenko ensures the kids are kept safe while the Heroics fly into battle. Afte the kids escape, Ms. Gradenko tirelessly searches for the kids and later reveals that she’s an alien. But while she seems to be evil, she and the other aliens are secretly plotting to help the kids.”

Rounding out what appears to be the main, kid hero cast for Robert Rodriguez is “Wheels” (Supporting male; 8-14). He’s “a kid Heroic whose muscles in his legs are so powerful that his bones can’t support him. He’s therefore confined to a wheelchair, but has a super-powered mind.”

Netflix teams up with Robert Rodriguez for his latest foray into the kid hero genre, but there’s no word on a release date. So stay tuned here to That Hashtag Show for more news on this film as the evolves!

A New Franchise or a New Failure? At long last … 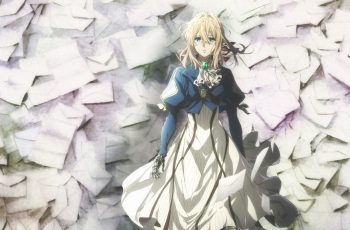 Violet Evergarden is a 13-episode anime currently available on Netflix. …