D23 is in full swing right now. And last night, Disney excited fans with new news about the Disney Parks.

Starting with Disney World, Disney Imagineering is working hard to get the new, reimagined Epcot done in time for Disney World’s 50th Anniversary. And there is a little bit of new info for it.

So, the area surrounding Spaceship Earth is getting a makeover, and is going to be a new, more modern area for Epcot. One thing we learned is that there will be a Moana themed attraction.

Disney has named the attraction Journey of Water, Inspired by “Moana.” This is the first attraction using the Moana IP. There is a ton of details for it, but the Disney Parks Blog is saying that:

“This first-ever experience based on the Walt Disney Animation Studios hit film, “Moana,” will let guests interact with magical, living water in a beautiful and inspiring setting.”

That’s right. Disneyland Paris and Disneyland in California are gearing up for Avengers Campus, the Marvel-themed land coming to both Disney parks. This new area is inspired by your favorite Marvel superheroes.

As far as we know, there will a Spider-Man themed ride in the area. And an Ant-Man themed Micro Brewery. The official Disney art has been released, and the area looks pretty amazing:

Sunday is the big Disney Parks panel at D23. We should get more information about the new Marvel-themed area, along with what else is coming to the rest of the parks across the world.

Disneyland is just one month away from the opening of … 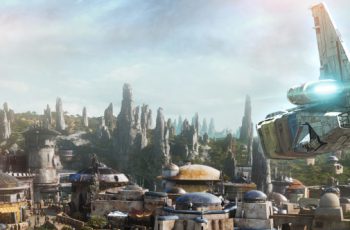 We are 5 months away from Star Wars: Galaxy’s Edge …