This week, Empire Magazine dropped some new cover photos for their January issue, along with a special subscriber cover and a special issue featuring a throwback to the original trilogy. Finally, they dropped another artist rendition of Dark Rey. Check it out below:

Our heroes get two covers of characters both old and new. I have to say, Billy Dee Williams (below) does not look like he’s lost a step as our suave swindler. I still feel the best place to reintroduce him would have been Canto Bight, but oh well. Also, Rose’s new outfit looks a bit more like she and Poe got the dress-alike memo. I feel safe in saying that the star-struck fan girl she played in The Last Jedi is no more. Finn also gets a wardrobe change, appearing to take a clue from the Han Solo’s closet collection but in a different color.

Leia is there in all her princess glory. Seeing how she is woven into the final film’s fabric will be interesting since we were promised no CGI. Star Wars stalwarts Chewbacca, C-3P0 and R2-D2 are there along with new droids D-0 and BB-8. Jannah is the newcomer here and she’s still a mystery. Notably absent is Kerri Russell’s Zorii Bliss. In all, nice photos, but these are of known commodities that don’t reveal anything new.

The Knights of Ren

Of the three, this one is the most exciting. However, the snippets on the Knights we’ve seen so far seem contradictory to the photo here. Going back to the first trailer, we get Kylo dropping the Rock Bottom on what looks like one of the Knights. In the latest TV spot, we see the Knights standing atop a cliff without Kylo Ren. This photo makes them look chummy. Well, as chummy as bad dudes can look and still be menacing.

So how truly cohesive is this unit of killers? The comics have shown us the Knights were not Luke’s former students. That’s a good thing. It would have been too easy to make them that. I hold to the theory they started as Acolytes of the Beyond and morphed into their militant arm. We’ll see in December.

This last subscriber cover says much more with less. Rey and Kylo’s sabers are discernible at the hilt, but the blades are as one, crossing a distant visage of Palpatine. I think this one tells a greater part of the story we’ll see, where Kylo and Rey will team up against the Emperor at some point. We’ve already seen those theories in other news stories. This cover cements the idea.

Dipping into archived photos, Empire has revived this throwback photo to the original trilogy. A nice touch of nostalgia, reminding us where it all began some 40+ years ago.

Star Wars.com was unclear of the origin of this piece, but it was included with the press release showing us what will likely become one of the most anticipated scenes in the film. Is she a vision? A clone? The original Rey? No one knows for sure, and the picture leaves more questions than answers on where this Rey comes from. I, for one, would like to see Dark Rey a little grittier. A little more worn and unpolished. Perhaps even with some tech mods for good measure. That double-blade means business, but she’s really not that scary otherwise. Here she looks like a scoffed bride on a bad day.

How about it, Star Wars fans? What are your plans for The Rise of Skywalker? Do you already have tickets? Let us know at That Hashtag Show what your plans for December 20th are! 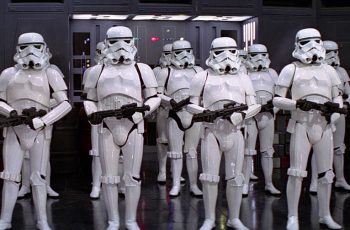 Will the real head bangin' Storm Trooper please stand up?
(lifeasahuman.com) Top 5 Reason Why You Should Love ‘Star Wars’ …