JJ Abrams sent Star Wars fans into a tizzy this week with an Instagram post in which he declared a wrap to photography for Star Wars: Episode IX. But did her perhaps reveal a little more than anticipated? The photo he posted showed sequel trilogy leads Daisy Ridley, John Boyega and Oscar Isaac embracing. Now fans are focusing on a blurred figure in the background. One fan thinks it could be none other than the one and only Dash Rendar.

Twitter user “dom nero” presents us with a four-panel expansion of the Abrams photo, zeroing in the figure in the background. He then draws a comparison to the figure and everyone’s favorite, shoulder-padded Corellian, Dash Rendar. See for yourself here:

Is That Dash Rendar on the Set of Star Wars: Episode IX?

As Epic Stream notes, the likelihood of a Dash Rendar appearance is pretty slim. Here’s the slightly fuller image of Rendar that dom nero uses for his comparison:

Sadly, unless Dash got a shoulder pad upgrade (or a utility vest), I think the “blurred figure” is probably some character other than the famed scoundrel-smuggler from Shadows of the Empire. Plus, if they stay true to Dash’s Shadows of the Empire backstory, he’d be the same age (roughly) as Han Solo. As much as fans want to see Dash in live-action, I don’t think a sixty-to-seventy year old Rendar is what people have in mind.

Further, the various canon hints to Dash Rendar we’ve already seen do indeed seem to coincide with his Legends backstory. The Outrider can be seen in the Special Edition of Star Wars: A New Hope. Dash is specifically mentioned by name in the companion book to Solo: A Star Wars Story, Tales From Vandor by Jason Fry. A YT-2400 freighter even popped up recently in the Star Wars comics.

No, I don’t think Dash Rendar will make an appearance in Episode IX. Unless… they did “adapt” the new canon continuity to accommodate Grand Admiral Thrawn, after all. So maybe….

A fan can hope, right? 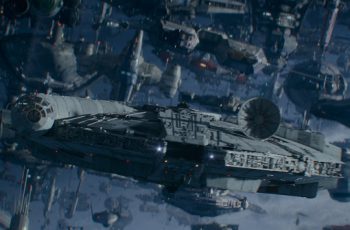 Just how many ships were packed into this climactic scene? … 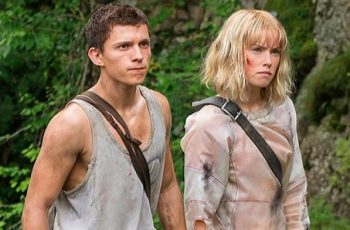 Daisy Ridley rocketed to stardom with her role as Rey, …