If you were worried, DC’s live action ‘Flash’ movie is still on track for a 2022 release. Andy Muschietti is still directing and Christine Hodgson remains as writer. The big news, however, is that the film is enough of a priority that the studio is prepared to move forward without Ezra Miller if need be.

For Those Who Came In Late…

With several hits under its belt, ranging from modest like Shazam! to spectacular like Aquaman, DC on film is finally a brand with audience support and trust behind it. This has made the development of future DC films easier but also very important. As it is vital that DC maintain that trust. One of the projects that DC and Warner Bros. have been taking their time with a film adaptation of is The Flash. A speed based hero who is one of DC’s most iconic characters. Flash has had great success on the small screen in various forms but no cinematic outings yet.

The State Of The Flash

Warner has had a Flash film on the table since they first teased the character in Batman vs. Superman: Dawn Of Justice. The project, like Suicide Squad 2, has had a hard time locking down writer or directors. That createda revolving door of people signing on only to later leave. Finally Christine Hodgson, fresh off the success of Bumblebee and Birds of Prey, signed on to pen the screenplay. Llikewise, Andy Muschietti will direct with a fresh take on the Flashpoint story line. (We told you about that in our exclusive story on the subject, which you can read HERE.)

According to a new, exclusive scoop from Fandomwire, Warner is reportedly very confident in Hodgson’s script and is currently in pre-production on the film. They are excited for Muschietti though they will have to wait until he has finished The Howling for Netflix.

Making the development of a solo Flash film somewhat complicated is the involvement of Ezra Miller. In early April a clip made the rounds on Twitter of Ezra Miller choking a female fan and throwing her to the ground. Miller has been attached to the character since he was first teased in BVS. He played him in Justice League and in a cameo in the recent Crisis On Infinite Earths crossover CW event. In all the years of development Miller has remained the only consistent talent attached to the project.

Sources confirmed that the clip is legitimate but neither Miller nor his representatives have commented publicly. This made some wonder whether or not the Flash film will move forward or not. Sources close to FandomWire have revealed that Warner is planning to move forward with the film, with or without Miller.

What’s It Even About?

The fact that Warner is prepared to recast Miller if needed to move The Flash forward is very interesting…. and tells us that there is more riding on this film then initially thought. Warner has been secretive about the exact plot of the film but details have finally come forward. The film will feature two classic Flash villains; Mirror Master and Reverse Flash. DC is currently looking for a male actor to play Reverse Flash, despite early rumors. Mirror Master on the other hand will be gender swapped and Warner is currently in talks with Jessica Chastain for the role. The plot itself will be a loose adaptation of the Flashpoint comic storyline and will feature The Flash traveling back in time to prevent the death of his mother and accidentally causing changes in the DC timeline.

Stay tuned here to That Hashtag Show for more news on The Flash as the story develops!

Another San Diego Comi-Con has come and gone. Plenty of … 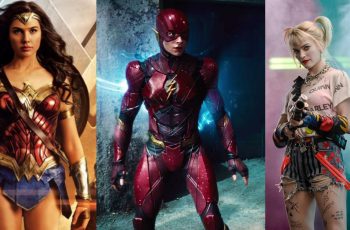 With FanDome now less than two weeks away, DC released …